We regularly visit our partners as part of our due diligence on the projects we support. But beyond this essential task these visits are an important part of connecting our staff with the communities we help (and of course that works both ways!).

Here are some excerpts from Marit’s personal blog post on her trip to Hin Lad Nok to attend the 2 day Community Nature Study Camp being run for the village children. And here you can read more about our partner Baan Huay Hin Lad Nok Community School. 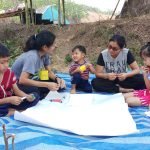 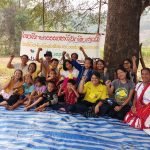 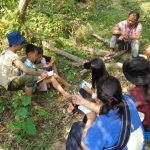 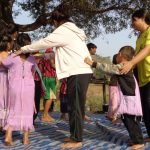 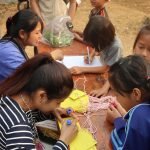 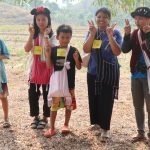 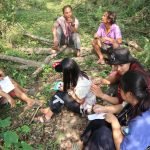 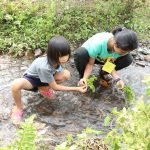 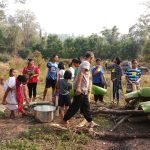 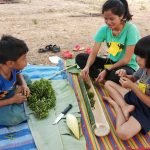 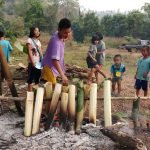 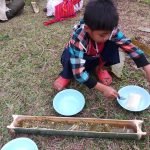 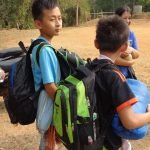 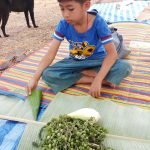 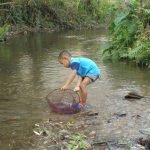 “We left at 10am on Tuesday for one of PCF’s projects a three-hour drive from the city.  I was warned a little bit that it would be very back to basic, so I had already prepared myself and that might have been good too.

After a three-hour drive, certainly one on a dirt road, we arrived in a village in the middle of the mountains.  What I also knew in advance is that almost no one would speak English and everything would be in Thai.  Fortunately my colleague Kan was on the trip with me, who does speak English.  Despite the language barrier, we were received very warmly.  We walked around the village a bit and looked at the terrain where the youth camp was to start on Wednesday.  I also (made an attempt at, actually) made a bamboo cup to the humorous delight of eveyone because it didn’t go very well!

Here in Thailand there are people from different ethnic tribes or backgrounds.  One is called “Karen.”  These people have special clothing wear.  There are beautiful colored dresses for unmarried women and beautiful, woven shirts for girls.  As a Western stranger, I naturally had to wear all of these and a whole photo shoot was done, which I thought was very funny and special.

On Wednesday we would have to get up between 5 and 6 in order to prepare everything for the children who arrive at 7 am.  I am very curious how that will be, because of course I cannot communicate with them in words.

Before dinner I went with Kan to do some sort of foot volley – suit takraew – but with a super small ball.  It was quite difficult, but I did well (even after not playing soccer for 3 years).  I found it so special that I was allowed to do what I love doing here in this area. That made me so happy.  It felt a bit like playing football at the campsite in France with my cousins. Again this is an example of how sport connects;  we didn’t even have to communicate because the ball did that for us and yet we were both super happy.  I also immediately notice that I miss it so much !!!

Day 2 started early in the morning.  I have not slept a wink, because I was basically on the floor, but even worse: the roosters that were not only in the morning but the whole night, kukelekuu, is said to be annoying!  So I was already exhausted at the camp, haha!

The children arrived around 8 o’clock.  First they had to register and they all got a name tag, just like me.  On mine was ‘Malee’, my Thai nickname.  Marit is really not an option here, not at all for children!  I actually think my nickname is really nice, so that’s totally fine.  I sometimes even just imagine Malee when people still look at me with my real name after being introduced twice.  The children reacted very differently to my presence.  Of course I couldn’t understand them, but their facial expression sometimes said enough, haha!  Some almost didn’t even realize that there was a stranger, but others thought it was a bit scary.  I can imagine that very well, because most children (and even adults) from such a local Thai village have never been outside that village, let alone outside the borders of Thailand.  Then suddenly there comes such a very tall blond foreigner lank with an appearance that is totally unknown to them, I completely understand the anxiety;)

The morning program consisted of four parts, my colleague explained.  The children were divided into small groups and then went into the mountains.  Here were four places where they were explained about: where the different rivers come from, the benefits of river water, aquatic animals and plants & greetings.  My colleague and I had to take pictures and report so we went to have a look everywhere.

It was really cool to see how those children already had a lot of knowledge (and learned of course) about how to survive in nature.  They easily caught fish, knew which plants they could eat, how to cook rice in bamboo, all super useful and useful!  I have seen with my own eyes how volunteers made this project super educational as well as amusing for the children, that is really finished!  And the skills they have learned are essential when you see the living conditions of the children in the village.  In the afternoon the children had to present what they had learned that day.  They did this using a mind map.

We probably started cooking at the end of the afternoon, but before we could do that, all children (including me) had to put their skills into practice by finding or catching their own dinner!  Some had vegetables and plants, others came back with fresh bananas and fish.  Then one of the inhabitants of the village showed us how to cook rice in bamboo.

After dinner we moved our things from the village to the camp, which was a 15-minute walk from the village.  The children slept in the open air, under a large sail that had been set up into a tent.  My colleague and I slept in our own tent, which we had set up a little further.  Before we went to sleep there was a kind of colorful evening with a campfire.  Everyone had prepared a piece and I danced with the volunteers of Bangkok University on a typical Thai song, totally fun. 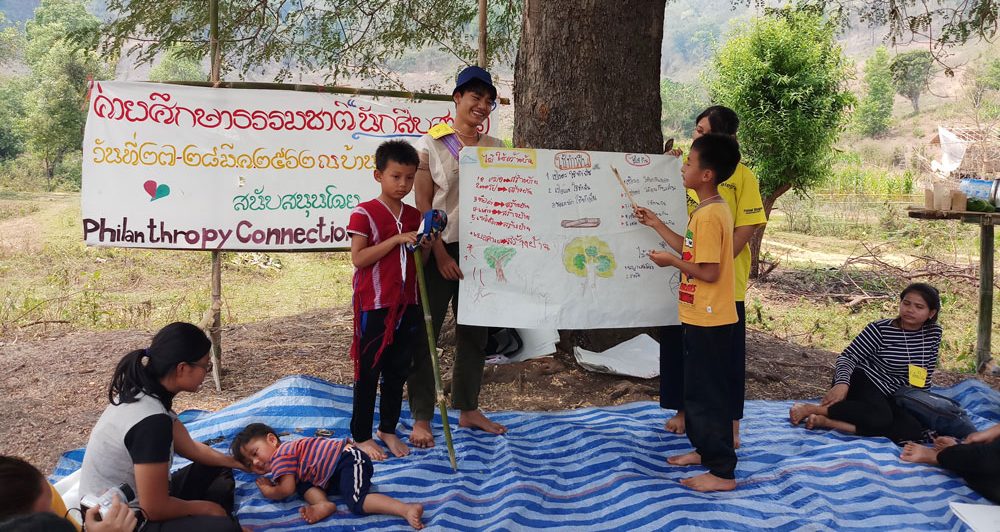 The last day had arrived.  Again we had to get up early and again a rice breakfast. What is nice to say is that Thai people sit on one large rug during dinner and share everything with each other.  Everyone eats from each other’s plates and shares everything.

The last activity took place in the mountains.  After walking for about 45 minutes up a 40 degrees slope we arrived at the other side of the mountain.  Along the way the knowledge that the children had gained in recent days was refreshed by some activities and my colleague and I took some last pictures.

I was of course difficult for me to make contact with the children given the language difference, but at the moments that it did work out, it was very special.  This happened, for example, on the way back to the camp.  There were some kind of fruits that fell from the trees and the children used that as a kind of whistle.  As a Western person, I was of course the only one unable to do so and they tried to help me until it worked.  They all thought it was great that I tried that, because it really is something from here.

After lunch and after the children had told one by one what they had learned from the project, everyone slowly started packing things up so we could drive back to the village in an old-fashioned car.  Then it was time to go back to Chiang Mai, where it had already rained.

Sitting on a proper chair while eating something other than rice, I recalled all amazing experiences that happened during the camp. Although it was meant for the children to gain knowledge on survival skills and their local environment, I also learned a lot. Definitely about the nature and its resources, but above all about the beautiful people and culture of Thailand.”

why we do this, thailand, girls education, schools, education
Share: 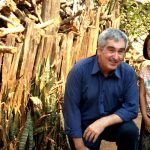 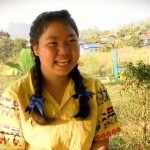 
Warning: count(): Parameter must be an array or an object that implements Countable in /home/philan40/public_html/wp-content/plugins/gravityforms/includes/fields/class-gf-field-list.php on line 685