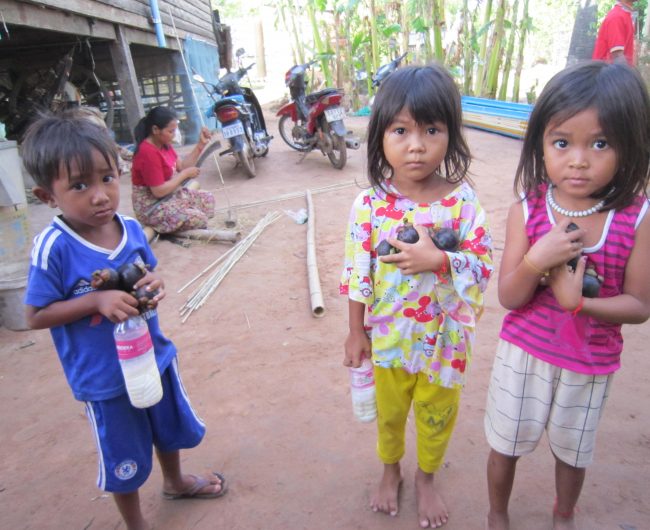 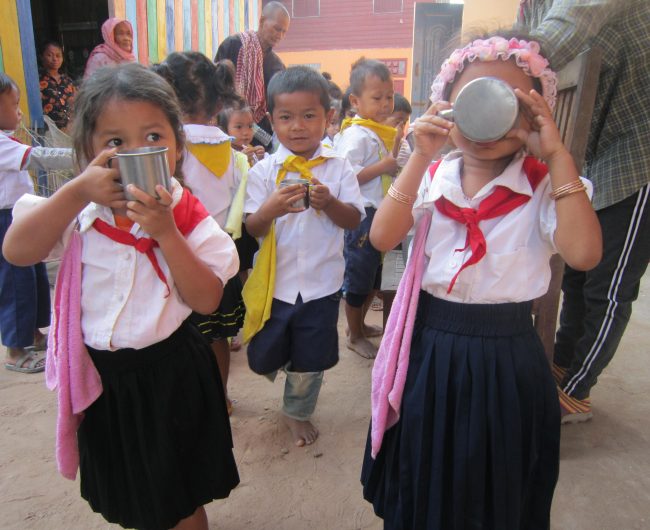 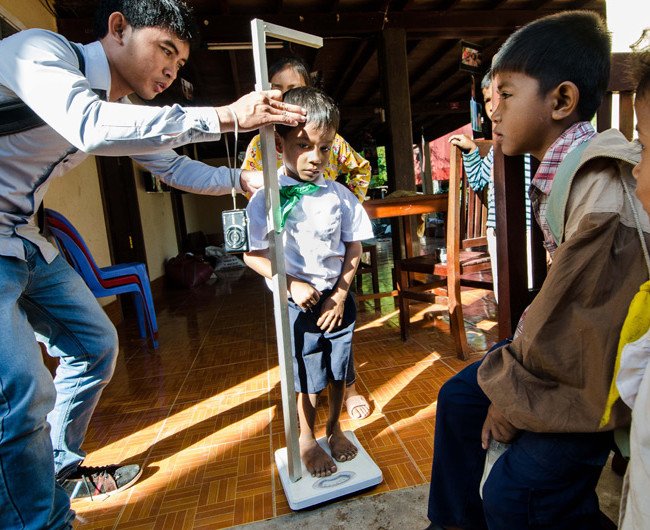 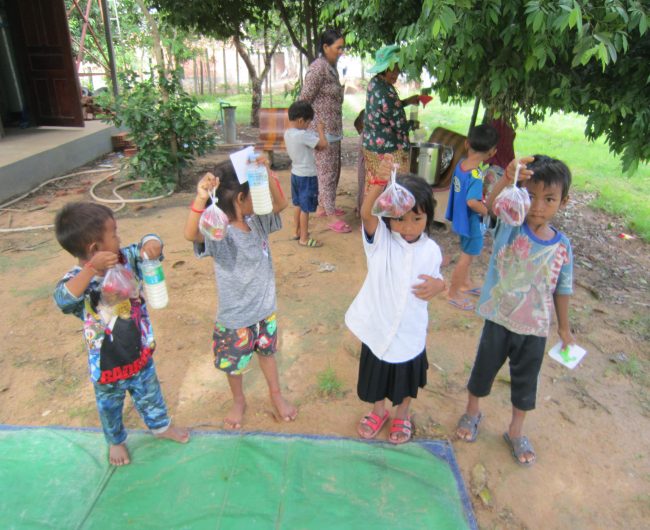 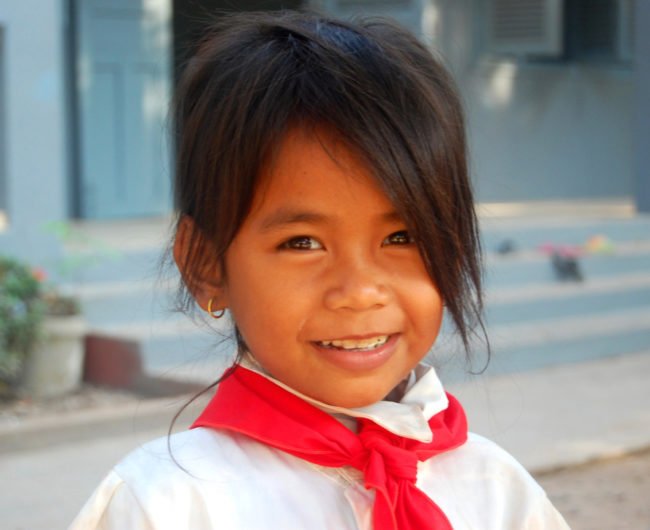 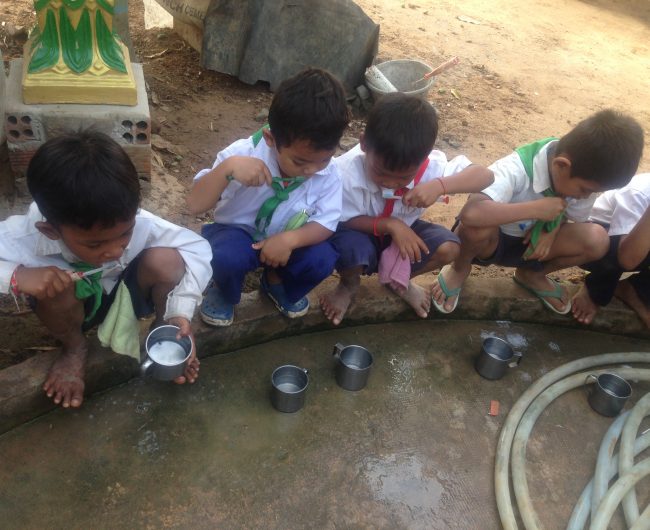 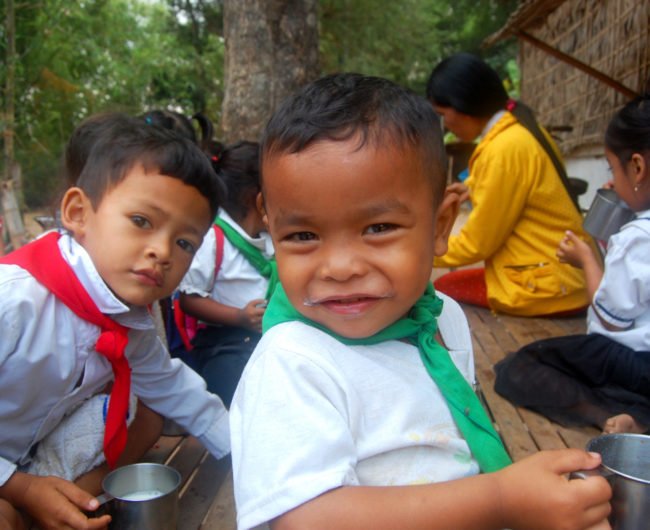 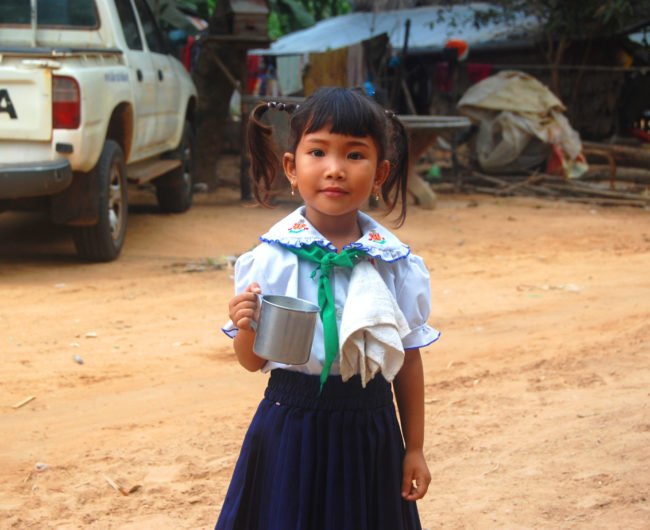 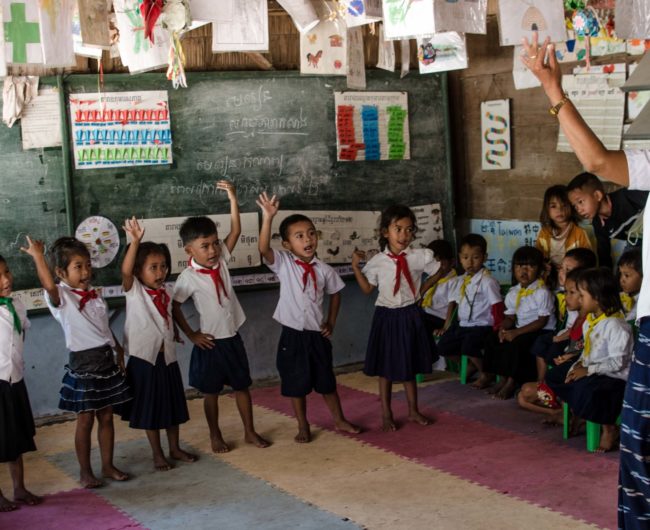 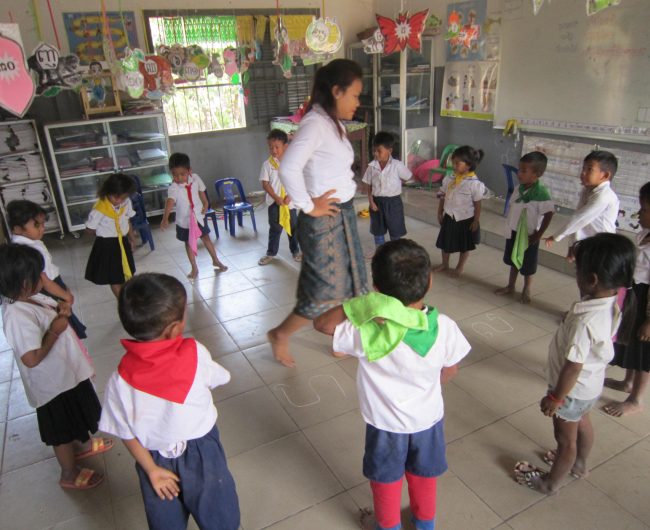 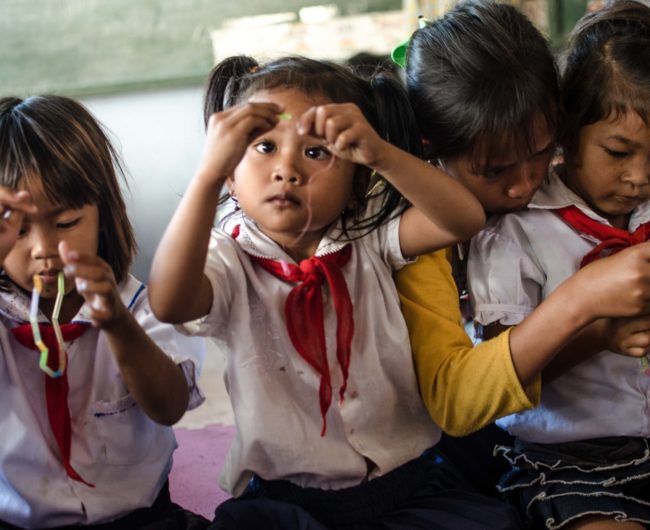 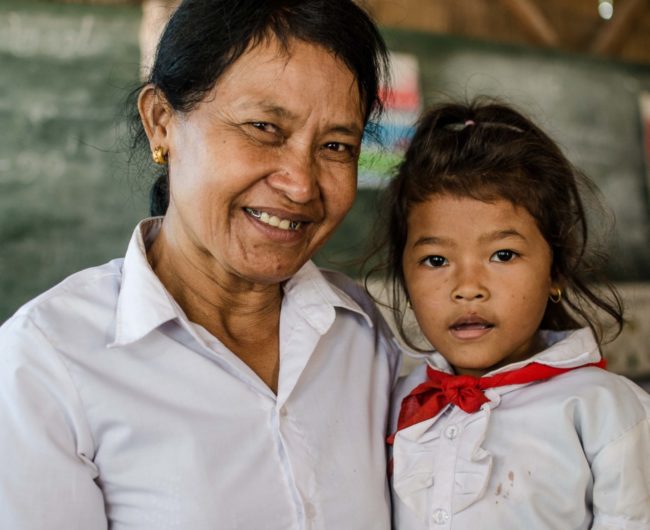 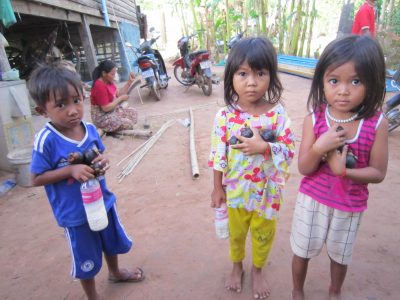 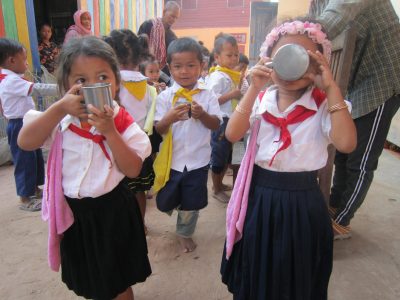 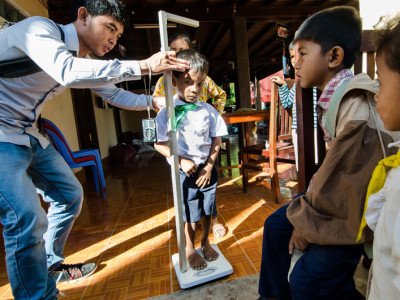 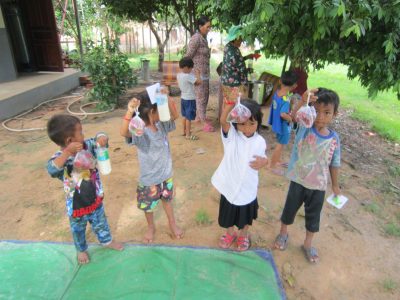 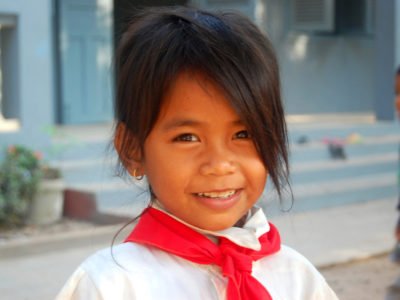 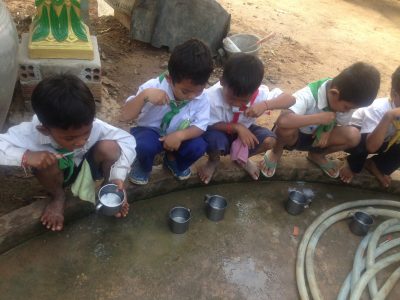 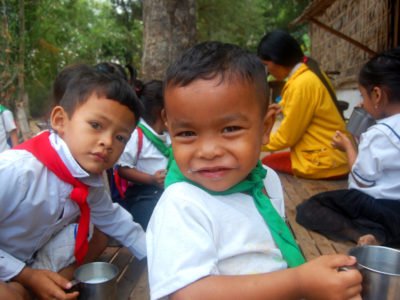 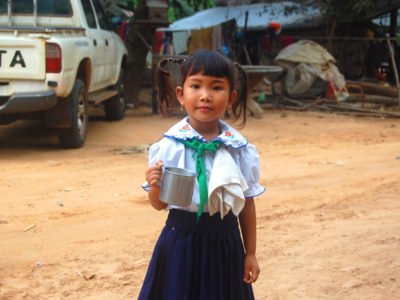 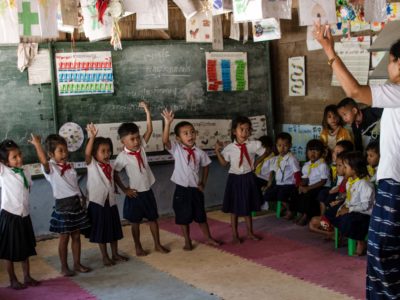 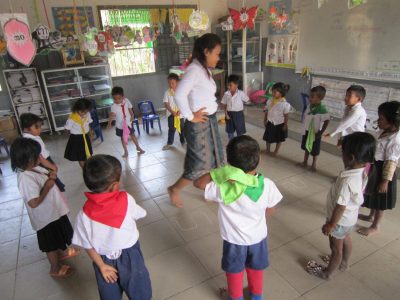 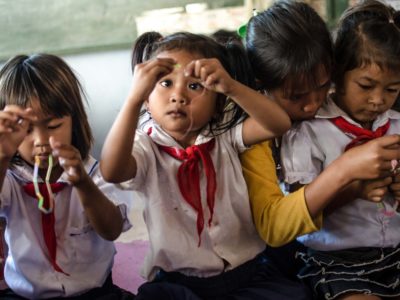 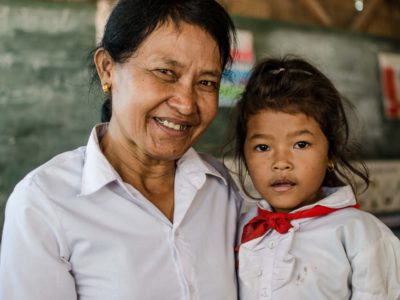 Khmer Akphiwat Khmer Organization (KAKO), our partner in Cambodia is active in non-formal education and community development projects in the province of Siem Reap.

In 2007 KAKO ran seven preschools in remote villages around Siem Reap, but in 2009 the sponsor stopped the funding and the preschools were closed. In 2011 KAKO reopened one preschool in Lvea village with the hope to reopen more.

The preschools ensure that between 80 to 100 children per year are well prepared to attend primary school, improving their chances of successfully completing their education.

In 2013 KAKO approached us to support the school in Lvea and reopen another two preschools. For this essential part of a coherent educational and health programme, we found sponsors who enabled us to fund the three preschools.

In 2017, KAKO began support for another preschool and approached us for funding, bringing the total up to four preschools: Lvea, Snor, Kouk Srama and Kouk Thmei Preschools.

As a developing country, Cambodia does not have the means to ensure basic education for everyone, especially in rural areas. While primary and secondary schools exist in the larger villages, there is an overall shortage of government-funded preschools. In addition, many villages are too remote for younger children (ages four to five) to attend the preschools that do exist, especially when rural roads are washed out during the rainy season.

This lack of access to early education places children from the least developed villages at an additional disadvantage when they reach school age (6), as they are often not ready and lag behind their peers. It is very difficult for them to catch up and many of these children drop out of school and will not get the chance to continue their education and improve their chances in life.

From the reopening of the KAKO preschools in 2013, until the end of 2016 over 145 children graduated from their preschools. In November 2015 the government agreed to assume responsibility for the preschool in Stung Preah Srok and absorb it into the local primary school. This gave KAKO the opportunity to respond to requests from parents and, with our funding, to open up another preschool in Kouk Srama Village. In 2017 KAKO was able to open an additional preschool in Kouk Thmei Village.

Last Friday we put our Cambodian partner KAKO in the spotlight.

During our ten-year partnership, we have supported their six preschools, five village libraries, the construction of more than 200 toilets, over 60 primary and secondary scholarship students per year and their operating costs.

Admin is not the most appealing of topics but without funding administration costs of our partner KAKO, their projects could not be implemented.

KAKO manages 6 preschool classes for a total of 130 children aged 3 to 5 years old, in five remote rural villages in Cambodia. They built hundreds of toilets to improve sanitation, and with that, the hygiene and health situation in numerous villages, and over 100 underserved children can attend primary and secondary school thanks to scholarships, of which we finance 64.

Without qualified staff and an office from where they can manage the projects and handle the complex local legislation, these vital programmes would simply disappear.

Thank you to the anonymous sponsor who acknowledges that ‘administration’ does not sound very exciting but it is essential to run these projects that benefit so many.

It is 90 years since Ole Kirk Christiansen established the 'leg godt' company in 1932, and 6 years since we received the first donation from the LEGO Employees' Anniversary Grant group.

Last year's grant of EUR 3.772 is used to support two preschool classes for 6 months, covering teachers' salaries and operational costs to prepare the preschoolers for a better future.

Thank you for all your support - your funds make a significant difference to underserved preschool children in Cambodia!

Other projects in Cambodia